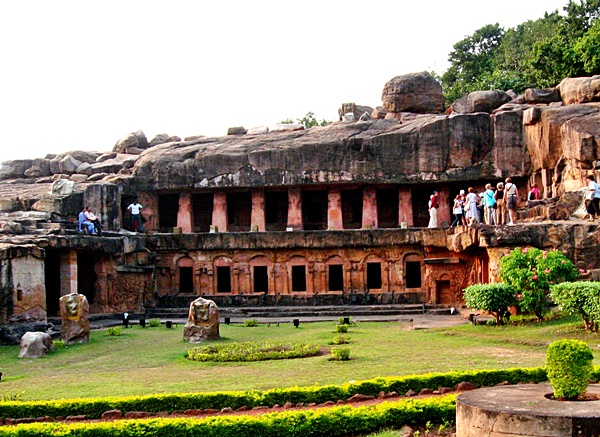 The twin hills Udayagiri and Khandagiri (Lat. 20.16 N; Long. 85.47E) are located in the vicinity of Bhubaneswar town. The National Highway No.5 passes through the close proximity of the hills. These two hills represent one of the earliest groups of Jaina rock-cut architecture in eastern India in the field of architecture, art and religion. These caves were first brought to the notice by A. Stirling in 1825 A.D.

Rising abruptly amidst a wide expanse of arid lateritic soil both the hills separated from each other by a narrow row through which passes modern road between Bhubaneswar and Chandaka. The ancient names of the twin hills of Udayagiri and Khandagiri are Kumari and Kumara parvatas respectively. . There are total 33 rock cut caves on both the hills out of which 18 caves are excavated on Udayagiri hill while 15 are on the Khandagiri hill. Generally caves are single storied but a few of them are double storied also.

These hills are honeycombed with excavated rock-cut caves, essentially meant for the dwelling retreats of the Jaina recluses. On the basis of inscriptional evidences, these caves were first excavated by king Kharavela of Chedi dynasty and his successors who were devout Jainas during the first century B.C. The Jaina occupation was continued here with occasional breaks down to the present day. The Jain temple on the top of the Khandagiri hill was constructed in late 19th century is under worship even at present, preserving the continuity and tradition of the glorious past of the hill.

The crest of Khandagiri on which Jaina temple stands, is 37.5 m high, 3.96 m higher than that of Udayagiri. The substance of the rock is coarse-grained sandstone of a varied texture. However, later on, these sandstones were duly exploited by the temple builders of Bhubaneswar during medieval period.

Meant for the residence of Jaina ascetics noted for their self mortification, the caves provide a little amenities. Most of the caves consist of a row of cells open either directly to the verandah or to the open space in front. These are essentially dormitories, an inference substantiated by a sloping rise of the floor to serve the purpose of a pillow. The doorways of the cells have pilasters on either side with crowning animal figures and arches over them are decorated with flowers, creepers and animal motifs. The sculptural and decorative art of the caves include panels/friezes depicting popular legends, historical episodes, religious observances, dancing performances. Besides, individual guards, bracket figures, vidyadharas, floral and geometrical patterns are noteworthy. The artistic embellishment in the early caves of Udayagiri-Khandagiri appear to have displayed a decided advance on the work of Bharut and Sanchi of Madhyadesa.

Ranigumpha and Swargapuri-Manchapuri caves are double storied and the largest in size. Ranigumpha or the queen’s palace is the architectural marvel of the entire complex. Though, architecturally the Hathi gumpha is insignificant but its historical importance lies to the famous inscription of king Kharavela engraved on its brow. The 17 line inscription records the expeditions of king Kharavela including victory of Magadha and retrieval of Jaina cult image taken away by the Nanda king long before. The depiction of 24 Tirthankaras along with Sasanadevis in the Barabhuji cave, Surya Gajalaksmi and Jaina symbols in the Ananta Gumpha of Khandagiri in relief are notable achievement of early medieval Indian art.

Besides, remains of an apsidal structure was unearthed in 1958 atop the Udayagiri.is the first earliest structure of its kind in eastern India.

The monument remains open from sunrise to sunset.