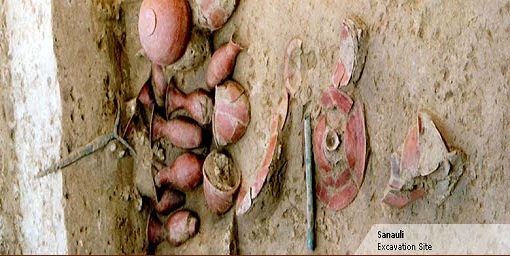 Sanauli, tehsil Barot, district Baghpat, U.P. is under excavation by the ASI since September 2005. The site was a chance discovery while locals undertook levelling operation for agricultural purposes. Subsequently, ASI identified the site as a prominent cemetery site of late Harappan period (early 2nd millennium B.C.).

The excavations have so far brought to light 125 burials all in north-south orientation; most of them are primary burials. Evidence for secondary and multiple burials have also been noted. In some burials, animal’s bones are also found next to the human bones. The burial goods consisted of vases (often placed near the head, and in odd numbers, 3, 5, 7, 9, 11, etc.), bowls, dish-on-stand (mostly placed below the hip), antenna swords and sheath of copper, TC figurines, etc. A good number of personal jewellery in the form of gold and copper bangles, beads of semi-precious stones (two necklaces of long barrel shape) and steatite, etc. are also found. The antenna swords from these burials have a striking resemblance with that of the copper hoards specimens.

Remains of a brick wall (50 X 50 X 24 cm) along with two dish-on-stands and a flat copper container (violin shaped) with nearly 35 arrow-head shaped copper objects placed in rows are among the important finds. Similar to the copper container, another symbolic burial yielded a careful arrangement of steatite beads in the shape of violin with a copper sheath placed across. These specimens may represent actual human beings.