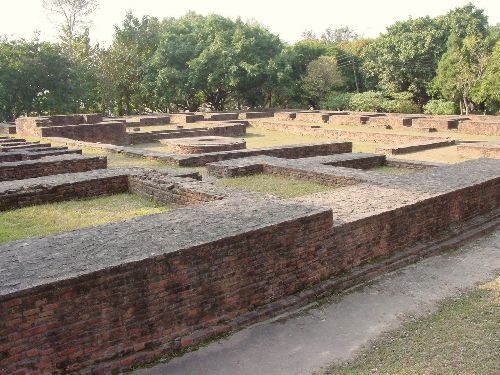 Ruins at Saheth, which are supposed to represent Jetavana, are spread within an inegular enclosure. Archaeological excavations conducted at regular intervals since 1863, have brought to light plinths and foundations of numerous Buddhist structures including stupas, monasteries and temples among which Gandha Kuti, Kosamba Kuti and recently exposed stupa-cum-tank complex n the northwestern side are most significant. Most of the earliest structures, at the site date from Ist cent. A.D. i.e. Kushan period, many of them rebuilt or renovated in later times. The latest constructions with intact plan of a monastery are assignable to eleventh-twelfth centuries and attributed to queen Kumardevi of Kannauj. The earliest available relics consist of a few Kushan structures and images; an image of the Mathura workshop was set up on the promenade of Buddha for the teachers of the Sarvastivada sect in Kosamba-kuti by the bhikshu Bala, who is known to have dedicated another image also at Sarnath in the reign of Kanishka.

Of the temples, the largest, Temple-2, is believed, without much reason, to stand on the site of the original Gandha-kuti erected by Anathapindika, though its lowest exposed part belongs only to the Gupta period. Located within an oblong enclosure-wall, 34.50m long and 26.70m wide, it consists of a sanctum and a mandapa. Another structure around the shrine, probably the plinth of a temple, had a decorated exterior and has been ascribed to the Gupta period.

From the fact that Bala’s image, mentioned above, was found near Temple-3 (built on the spot of an earlier temple), the temple is held to have been built on the site of the original Kosamba-kuti. The temple is now completely ruined, only the shells of the shrine and mandapa having survived. In front of the temple are two solid brick terraces, supposed to mark the site of Buddha’s promenade.

Temple 1, situated within the courtyard of a large monastery of about the tenth century A.D., has the same plan of the sanctum and mandapa. Temple-11 and 12 have the unusual plan of three rooms in a row with a narrow verandah in front and a pradakshina-patha around the central chamber. Temple-12, with several projections, however, has a porch.

The monasteries of Jetavana have the normal plan of Buddhist monasteries. They are generally speaking, early mediaeval in date, an exception being monasteries F and G, contiguous to and contemporaneous with each other, in the former of which was found a hoard of coins of the Kushan kings. Of the other early monasteries, only stray walls are met with below later structures.

Mention may be made of Temple and Monastery-19, which had its origin in the Gupta period, as testified by a clay tablet with the Buddhist creed in Gupta characters. It was renovated in the tenth century, to which period belong several images, and finally reconstructed in the eleventh-twelfth century. An interesting find of the last period is a copper-plate charter, dated A.D. 1130, of the Gahadavala ruler Govindachandra recording the grant of villages to the monks of the Jetavana-mahavihara.

Stupa 17 and 18, adjacent to each other, deserve special mention, as their beginnings seem to go back to the Kushan age, though their original shapes were covered up by later structures. Enshrined in it, at a depth of 3.10m, was an earthen pot with a bead of gold, two pieces of thin gold wire and a bead and a bezel, both of crystal. About 1.52m below the top of Stupa-18 was a relic-chamber with an earthen bowl bearing a short dedicatory inscription in Kushan characters and containing fragments of bone, a large number of beads of gold and semi-precious stones and large pearls.

Stupa-5 appears to be originally a stupa built on a terrace which was converted into a shrine and was finally made into a stupa again. Similarly, stupa H was reconstructed several times. Stupa-8 had two periods of construction, the earlier with a circular plan and the later square having a moulded facing and a shallow projection. Inside the later stupa was found the lower portion of an image of Bodhisattva which had a Kushan inscription, recording its manufacture by a Mathura sculptor and dedication in Jetavana by two brothers. A second inscription-Buddhist creed in characters of the ninth or tenth century A.D.-on this very image was added presumably at the time of its deposit inside the later phase. Stupa 9, a medieval structure by the side of Stupa 8, yielded an image of Buddha. The inscription on its pedestal in late Kushan characters records its gift by one Sihadeva of Saketa.