The sprawling caves of Bhimbetka (2405’N and 76045’E) are located about 45 km northeast of Bhopal, the state capital of Madhya Pradesh. Situated along the Bhopal-Hoshangabad highway, these caves bear proximity to the Bhiyapura village in Raisen district. The northern fringes of the ancient Vindhyachal ranges are home to the extraordinary rock shelters and paintings, its awesome rocks fortifying the ancient treasure within. Ensconced amidst lush greenery in dense forests, and rocky terrain and craggy cliffs, with the lofty rocks guarding the ancient premises, the caves of Bhimbetka present a breathtaking view even from as far as Obaidullaganj, a small town in the vicinity of Bhimbetka. 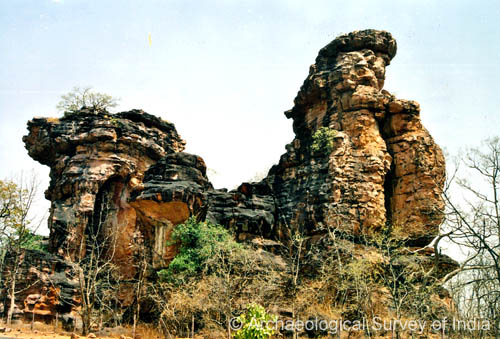 Bhimbetka owes its name to the characters of the longest epic in the world, the Mahabharata. It is believed that when the five brothers, called Pandavas, were banished from their kingdom, they came here and stayed in these caves, the massive rocks seating the gigantic frame of Bhima, the second Pandava. Further evidence, cited in support of this theory, is the resemblance in names of the nearby places with the names of the Pandavas. Thus, one of the villages is known as Pandapur. While Bhiyapura itself is believed to be a distortion of Bhimpura. As regards the surrounding Lakhajuhar forest, it is said that it was the Pandava’s palace, built of lakh (was). However, the veracity of these claims still remains to be corroborated with concrete evidence.

The caves of Bhimbetka were discovered in 1957-58 by one of the great accidents of history. An intrepid archaeologist from Vikram University, Ujjain, Dr. Vishnu Wakankar, strayed too far from the beaten path and found himself amidst this prehistoric treasure trove. In due course of time, the archaeological excavations yielded remains, serially from the Lower Palaeolithic Age to the Early medieval Ages.

Bhimbetka is a natural art gallery and an archaeological treasure. For miles together, the footsteps of the prehistoric man can be easily discerned upon the sands of time, since the caves here house rock paintings, created by man from as early as about 15,000 years ago in vivid and panoramic detail.

The rock paintings have numerous layers belonging to various epochs of time, ranging from the Upper Palaeolithic, Mesolithic Age to the protohistoric, early historic and medieval periods. The most ancient scenes here believed to be commonly belonging to the Mesolithic Age. These magnificent paintings can be seen even on the ceiling of the rock shelters located at daunting heights.

The cover of the dense forest and vegetation protected these rocks painting from being lost to the vagaries of nature. Executed mainly in red and white, with the occasional use of green and yellow with themes taken from the everyday events of eons ago, the scenes usually depict hunting, dancing, horse and elephant riders, animal fights, honey collection, decoration of bodies, disguises, masks and different type of animals etc. It depicts the detail of social life during the long period of time, when man used to frequent these rock shelters.

The rock art of Bhimbetka has been classified into various groups on the basis of the style and subject. The superimposition of paintings shows that the same canvas was used by different people at different times. The drawings and paintings can be classified under seven different periods.

These are linear representations, in green and dark red, of huge figures of animals, such as bisons and boar beside stick like human figures. 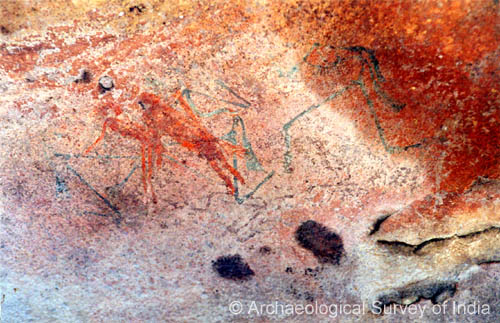 Comparatively smaller in size, the stylised figures in this group show linear decoration on the body. In addition to animals, there are human figures and hunting scenes giving a clear picture of the weapons used in those times. These included barbed spears, pointed sticks, bows and arrows. The depiction of communal dances, birds, mother and child, pregnant women, men carrying dead animal, drinking etc, are seen in this rock shelter range. 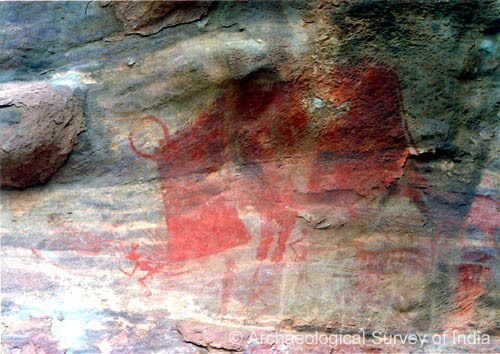 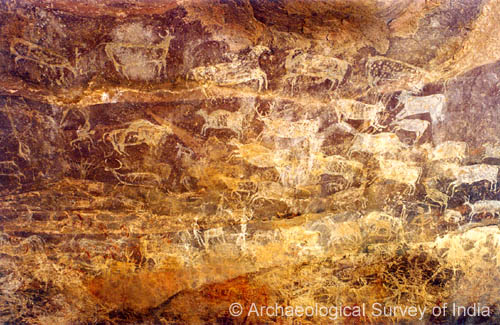 Similar to the paintings of Chalcolithic pottery, these drawings reveal the association, contact, and mutual exchange of requirements of the cave dwellers of this area with the agricultural communities of the Malwa plains.

The figures of this group have a schematic and decorative style and are painted mainly in red, white and rarely green depicting riders, religious symbols, tunic-like dresses, and the scripts of different periods.

These paintings are geometric, linear and more schematic but show degeneration and crudeness in their artistic style. Now paintings of Brahmanical gods like Ganesh and Natraja appear for the first time in these rock shelters.

Thus, the high sloping face of the ceilings of these extraordinary rock shelters bear scenes, frozen in action of a long expanse of time starting from the period when man was a hunter gatherer to the time when iron technology had become quite significant. A study of these painting gives rare glimpses into the activities of the prehistoric man, his clothing, the animals, and numerous other facets of the then day to day life. A visit to Bhimbetka is akin to being transported into the past, while gathering wonderful insights into the psyche and actions of the man that inhabited these caves thousands of years ago. From the nomadic ways of the prehistoric man to a settled agricultural life, his interaction with the communities living in the plains and the gradual changes and adaptations in the crude lifestyle Bhimbetka paintings reflect all this and much more in vivid detail. These caves represent live documentation of the development of style, aptly seen in the myriad images painted on the rocks which, themselves graduate from being linear representation to more evolved shapes, depicting a variety of forms and images.

Bhimbetka amazes not only because of its caves and rock paintings. In fact, numerous other archaeological remains which have been excavated are delightfully being savoured by both the archaeologist and the tourist. A trip to Bhimbetka is a journey into the past, and can serve as an adventure for the more discerning visitor. Besides the rock art and rock shelters, Bhimbetka is home to such remains of yesteryears as walls of a ruined citadel, mini stupas indicating Buddhist influence in the Maurya / Sunga periods in this area, besides rock cut beds attributed to Buddhist monks. There are various inscriptions, which date back to the Sunga, Kushan, Gupta periods. Shankha script inscriptions, which are undeciphered so far, are also commonly seen. Some architectural members of a temple belonging to the Parmara period are also noticed. Thus the visible remains including the paintings belong to various periods right from the Upper Palaeolithic age to the Medieval times.

But, the most significant of all discoveries are the large number of stone tools found during the course of excavations carried out by various universities. This suggests that the rock shelters of Bhimbetka served as habitation sites of remote past right from the lower Palaeolithic period. The tools also give welcome insights into the progressive changes that the prehistoric man was undergoing. As the man began hunting for food, his implements for this task evolved from the crude, unworked ones to more technical ones, catering to a variety of his needs and requirements which again were becoming more specific and varied.

Overall, Bhimbetka caves with their art treasure, serve as an invaluable chronicle in the history of man. The rock paintings here track the gradual progress and various adaptations that the prehistoric man was making in his lifestyle. That he was learning slowly to adapt the natural elements to his comfort and convenience aptly reflected in the rock art at Bhimbetka.

Bhopal (about 46 Km.from Bhimbetka) is the nearest airport connected with Mumbai, Delhi, Indore and Gwalior.

Bhopal, on the Delhi-Chennai and Delhi-Mumbai mainline is the more convenient railhead.

Bhimbetka, situated on the Bhopal-Hoshangabad National Highway No. 69, is well connected by bus.