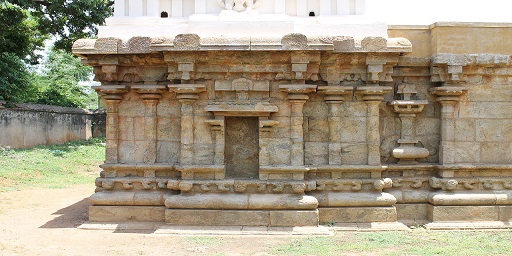 The most significant feature of the monument is the occurrence of traces of an inscription on music like the one preserved in full at Kudumiyanmalai. Unfortunately, this inscription was obliterated in the 13th century. The space was used for engraving an inscription recording the award of the tribunal by Hoysala general Appanna in the feud between the trustees of this temple and the adjacent Vishnu temple. Nevertheless, some of the letters in the Grantham script giving the svaras (notes) and the (colophon parivadhinida (parvadhini, a stringed instrument) and the name Gunasena in contemporary Tamil characters are still discernable. There are few other inscriptions of later periods in this temple. There are number of other structures built around this cave-temple in the subsequent periods.