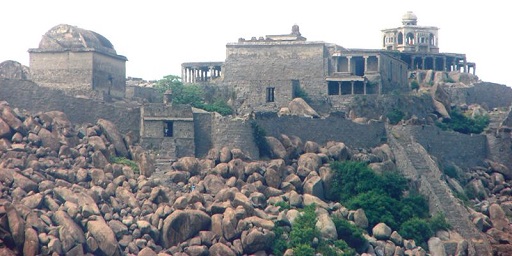 Ticketed Monuments – Tamil Nadu
Though the construction of the hill fort at Gingee is traditionally ascribed to one Anada Kon, a local chief, it came into prominence with the rise of Nayakas of Gingee in early 17th century. The Muslim sultans of Bijapur, the Moguls, the Marathas are always recognised the strategic importance of the fort and everybody always fought hard to retain the fort. So much so, the vision of Sivaji, the great Maratha warrior became true, as Gingee was the seat of Maratha power for few months when Rajaram fled to Maharashtra in the wars with the Moguls.

The outer fortification of Gingee runs in a triangular form over the three prominent hillock viz. Rajagiri, Krishnagiri and the Chakklidurg and the intervening spaces. The fortification is about 13 km in length and the fort covers an area of about 11 sq.km. There are two prominent gateways viz. the Arcot and Pondicherry gates.

The ancient city was located in the intervening space. The inner fortification runs around the royal buildings located at the foot and upon the prominent Rajagiri hillock. Important among the royal buildings are the Kalyana Mahal, the rows of enclosure for the royal staff (wrongly named horse stables) the huge granaries (wrongly named Gymnasium) besides the remains of the rulers exclusive quarters, King’s audience hall and the private chambers for holding meetings of council of ministers, a palace complex, a massive tank called Elephants’ tank, all located at the foot of the hillock. The remains like pleasure pavilions and the Krishna temple atop the Krishnagiri are also equally royal in nature.

Kalyana Mahal is a pleasure pavilion of seven stories. There is a stepped tank with fountains set in the masonry of the steps. The tank was possibly fed by a system of conduits and excess water from the rains. There is a spiral staircase running along the masonry of inner hall. The Inner hall in all the stories has an open veranda on all sides.

The private quarter of the ruler has a hall at the centre surrounded smaller rooms and provided with a private toilet. There is a spiral staircase to climb down to the Audience Hall. The Audience Hall has a square area marked by a high and ornate platform with bold traditional temple-type mouldings. There is a massive stone backrest. There are tied platform for the courtiers to assemble.

Upon the hillock are minor chains of fortifications. There is shrine for Kamalakkanai amman, the guardian goddesses of the place. Atop is granary, magazine, bastion with guns and temple.

The whole layout of inner fortification was so well laid out taking into consideration of needs of the occupants including security and sustainability in the event of protracted siege.
The structures outside the inner fortification include the Venkataramana temple, the temple of the ancient Gingee and the Sadaatullah Khan’s mosque.

Others:
Indian Rs. 300/- per head (Admission fee applicable only to all monuments within the Rajagiri Fort and Krishnagiri Fort)