Group of Monuments at Pattadakal (1987), Karnataka

Chalukyan rulers were not only empire builders, but great patrons of art whose encouragement prompted the artists and craftsmen to experiment and innovate in different architectural styles and giving it a new dimension. It is in their period that transition from rock-cut medium to structural temples took place.

Pattadakal located in Bijapur district of Karnataka was not only popular for Chalukyan architectural activities but also a holy place for royal coronation, ‘Pattadakisuvolal’. Temples constructed here mark the blending of the Rekha, Nagara, Prasada and the Dravida Vimana styles of temple building.

The oldest temple at Pattadakal is Sangamesvara built by Vijayaditya Satyasraya (AD 697-733). The other notable temples at Pattadakal are the Kadasiddhesvara, Jambulingeswara both attributed to 7th century A.D. while Galaganatha temple was built a century later in the style of rekha nagara prasada. The Kasivisvesvara temple was the last to be built in early Chalukyan style. The Mallikarjuna temple was constructed by Rani Trilokyamahadevi to celebrate the victory over the Pallavas by Vikramaditya II. She is also credited to have built the Virupaksha temple influenced by the architecture of the Kailasanatha temple at Kanchipuram. The Virupaksha temple later served as a model for the Rashtrakuta ruler Krishna I (757 -783 A.D.) to carve out the great Kailasa at Ellora. 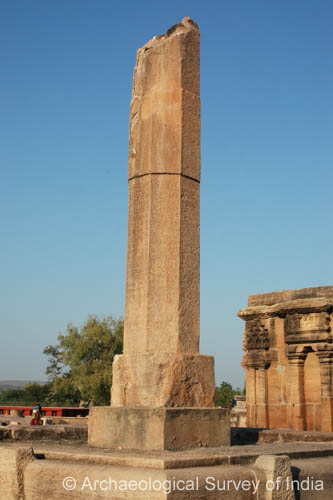 However, the last addition at Pattadakal was made during the reign of Rashtrakuta ruler Krishna II of the 9th century A.D. in form of a Jaina temple, locally famous as Jaina Narayana, with its two lower storeys functional.

The sculptural art of the early Chalukyas is characterised by grace and delicate details. The ceiling panels of the navagrahas, dikpalas, the dancing Nataraja, the wall niches containing Lingodbhava, Ardhanarisvara, Tripurari, Varahavishnu, Trivikrama bear ample testimony to the sculptor’s skill as well as the cult worship in vogue. The narrative relief illustrating certain episodes from the Ramayana, Mahabharata, Bhagavata and Panchatantra fitted well with these grand religious edifices.

The Sangamesvara, Virupaksha and Mallikarjuna temples at Pattadakkal exhibit to a large degree the southerly elements in their vimanas, as crystallized in the contemporary Pallava temples.

The Sangamesvara, the earliest of the three, built by Chalukya Vijayaditya (697-733), is nearer the Pallava form in that it has no sukanasika, while the other two, which possess this, are the earliest of the Chalukyan type and its derivatives possessing this architectural member, as also does the Kailasa at Ellora. Both the Sangamesvara and the larger Virupaksha are similar to each other in being square on plan from the base to sikhara. The Virupaksha, built by the queen of Vikramaditya II (733-46), is the earliest dated temple with the sukanasika, being closely followed by the Mallikarjuna, built by another queen of the same king.

The main vimana of the Sangamesvara is of three storeys. The lowermost storey is surrounded by two walls, the inner and outer, the second storey being an upward projection of the inner wall, while the outer wall encloses the covered circumambulatory round the sanctum. 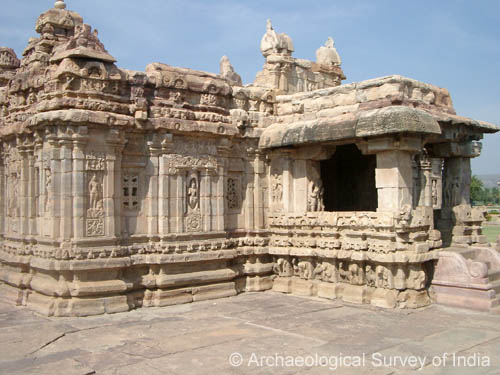 The Virupaksha is a large complex consisting of a tall vimana with axial mandapas and peripheral sub-shrines round the court, enclosed by a wall with gopura-entrances in front and behind, all designed and completed at one time. As such, this is the earliest extant temple-complex in the Chalukyan series. The massive gopuras are also the earliest. The compound-wall of the complex, following the plan of the group itself, has on its coping kuta and said-heads, suggestive of a derivation from the Shore-temple at Mahabalipuram-a device which gives the impression of a lower storey when viewed from a distance.

The Mallikarjuna, built immediately after and close to the Virupaksha, is a smaller temple with a four-storeyed vimana with a circular griva and sikhara. It has more or less a similar plan.

(children up to 15 years free