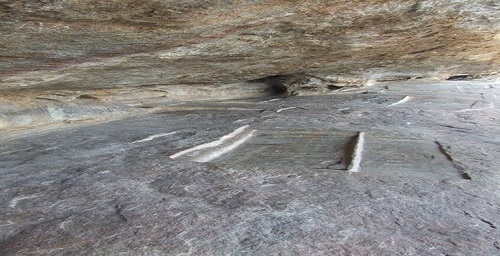 This natural cavern located on the summit of a low hill called Eladipattam is quite spacious and has a low roof. There are about seventeen beds, rectangular evened spaces with a sort of stone pillow, marked out for the use of Jaina ascetics to perform austerities such as kayotsarga and sallekhana.

Many of the beds are inscribed, the earliest of them in the late 2nd century BC Brahmi characters in Tamil language recoding that Cirupocil Ilayar made this atitaanam (adhisthanam, abode or a dwelling place) for Kavuti Iten, who was born at Kumuzur in the Eominadu’. Scholars also identify this territorial division of Eruminadu i.e. modern Mysore.

An inscription of 7th century AD characters on this bed indicates the long use of the bed and the cavern by Jaina ascetics. The other inscriptions gives names of, various Jaina monks, all indicating that the shelter was in use from 2nd century BC to 13th century AD. Further in the recent times a number of label inscriptions written in vattelettu script datable to 5th – 6th centuries AD have also been found in another natural cavern in the same hill.