Khajuraho, with its renowned group of medieval temples, is situated in Chhatarpur District of Madhya Pradesh. It is situated 54 km south of Mahoba, 45 km east of Chhatarpur and 105 km west of Satna District and is well connected by metalled roads from nearest rail heads, viz. Mahoba, Satna and Jhansi. 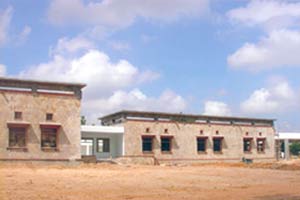 In 1910 at the initiative of Mr. W.A. Jardine the then local officer of British government in Bundelkhand, the loose sculptures and architectural members of the ruined temples of Khajuraho were collected and preserved in an enclosure built adjoining to the Matangeshwar Temple of western group of temples. The open air collection continued to be known as Jardine Museum until the Archaeological Survey of India took it over in 1952, when its name was changed to Archaeological Museum. Now this open-air museum is being used for reserve collection and the public entry is prohibited inside this enclosure.

The present museum was established in 1967 making use of the representative collection of Khajuraho sculptures from the open-air museum. The most important sculptures of this museum represent Brahmanical, Jaina, and Buddhist faiths and are displayed in the five galleries inclusive of the main hall.

Timings of visit: 10 AM to 5 PM
Friday Closed