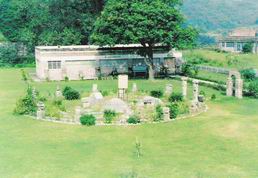 The Archaeological Museum at Kangra Fort, Kangra (H.P.) was opened to the public on 26th January 2002. Located to the east of the fort under its shadow, and overlooking the gorgeous river Banganga, the museum has a moderate collection of stone tools of the prehistoric periods, besides sculptures, architectural members, coins and paintings of the historical periods. All artifacts are classified and arranged in four main Sections in different museum galleries. Over the years, these objects have been acquired from different sources which are all now registered and thoroughly documented. Best among them are put on display. 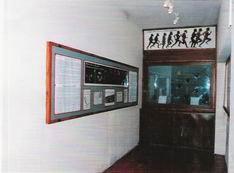 Section I (Prehistory Section) display s the Lower Paleolithic tools comprising chopper-chopping, unifacial and bifacial stone tools, hand-axes, cleavers, etc. In addition, there are demonstrated translites and charts depicting evolution of man and its various cultural stages. A translite in this Section reveals brief history of Kangra Fort in particular, and that of the Kangra region, in general.

Section II (Sculpture Section) shows an array of Hindu and Jain deities, represented by Shiva, Vishnu, Uma-Maheswar, Ganesh, Hanuman, on one hand, and Jain Tirthankaras, on the other.

Of most noteworthy amongst the Jain sculptures is Lord Adinath, first Jain Tirthankara, which has an inscribed pedestal. The architectural members and fragments displayed in this Section mostly come from Hindu the temples, and include pillar bases, bracket capitals, lintel fragments, etc. Most of these members are the parts of collapsed temples which were destroyed in the massive earthquake occurred in 1905 in entire Kangra region. 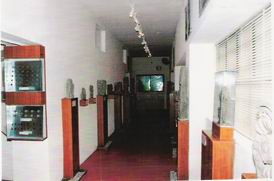 Section III (Numismatic Section) displays silver and copper coins of various rulers of different dynasties of the region, namely Hindu Shahi, Katoch as well as Muslims. In addition, there are British period coins.

Miniature paintings are organized in Section IV (Painting Section). Most of these follow Kangra School of Painting style. Predominant theme of these paintings is Radha & Krishna love scenes inspired from mythological and other legendary sources.

One more added attraction in the museum is a brass miniature dola (miniature palanquin) of goddess Chamunda Devi aslo, which is held in high esteem in entire Kangra region.
Over and above, there is a small reserve collection of sculptures and architectural members, some of which are exquisitely carved fine specimens of sculptural and architectural wealth of the region.

Visiting hours : 10 am to 5 pm
Closed on : Friday
Entrance Fees : No Fees for the Museum