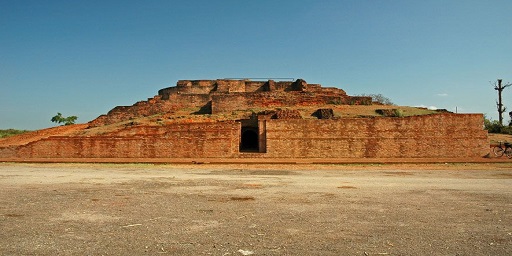 Ancient city of Sravasti, which is now represented by groups of remains known as Saheth-Maheth together with adjacent sites-Orajhar, Panahiajhar and Kharahuwanjhar is located in newly created district of Sravastinagar while a portion of it falls in district Balrampur U.P. framed by Lat. 27031 N. and Long. 8202’E. The earliest references of the city are available in Ramayana and Mahabharata as a prosperous city in the kingdom of Kosala. Panini in his Ashtadhyayi makes a mention of Kosala while Pali Buddhist literature also makes numerous references to Kosala, its history and society. In the Puranas, it is described as the capital of North Kosala. It is said to have derived its name from a legendary king Sravasta of solar race who is stated to have founded the city. In later times, it was also known as ‘Chandrikapuri’ and ‘Champakpuri’. It is referred to as ‘Saravasti’ by Kalidas. Anguttara Nikaya mentions Kosala as one of the sixteen great Janapadas.

In the 6th century BC, during the reign of Presenajit, the place rose to fame due to its association with Buddha and Mahavira and became one of the eight holy places of Buddhist pilgrimage. Buddha is said to have spent 24 rainy seasons here after his disciple Sudatta Anathapindika built a monastery for him at Jetavana. Buddha is also said to have performed here ‘Great Miracle’ when confronted with a challenge from other sects. Conversion of a robber Angulimala was also one of the stirring episodes of that period. Some of the well-known bhikshunis hailed from this place including Visakha, Sumana, etc.

Sravasti was not only the capital of a powerful kingdom but was also home of philosophical speculations, where a member of schools of thought had already established themselves before the advent of Buddha. Mahavira, the twenty-forth Jaina Tirathankara, gathered here a great following and King Prasenajit was also initially one of the votaries. Sravasti is also believed to be the birth-place of two other tirathankaras Sambhavanath and Chandra Prabha. Ajivika guru, Gosal Mankhaliputra who was born at Saravana, a settlement in city, had ardent admirers here.King Asoka is said to have visited the place and erected two pillars on the eastern gates of Jetavana. Besides, he also built a stupa in the vicinity. During the time of Kushans, the Buddhism became popular religion with royal support. The place was also mentioned by Fa-hien and Hiuen Tsang in their travel accounts.

Hardly any reliable information exists regarding Sravasti in the centuries following the visit of Hiuen Tsang. Jaimini-Bharata, a medieval work, mentions a king named Suhridhvaja who is supposed to have fought against Muslim invaders and is credited to have revived Jainism. In the middle of twelfth century, queen Kumardevi contributed to establishment of monasteries here. The ruins of Sravasti remained forgotten until they were brought to light and identified by Sir Alexander Cunningham in 1863.

(Free entry for children below the age of 15)