Bodh Gaya is associated with the enlightenment of Lord Buddha (566-486 B.C.). The sacred Bodhi tree under which he is believed to have attained enlightenment. The place is highly venerated by the Buddhists. Emperor Asoka visited Bodh Gaya around 260 B.C. and constructed a small temple near the Bodhi tree. An inscription datable to 1st – 2nd century A.D. mentions that the temple of Asoka was replaced by a new one. 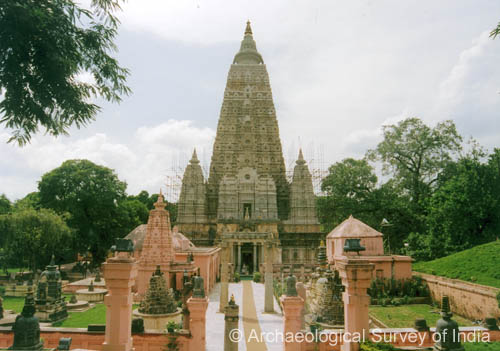 Fahien first makes reference to the main temple and the Bodhi tree in 404-05 A.D. Hieun Tsang, who visited the site in 637 A.D. mentions the presence of walls surrounding the Bodhi tree, within which stood the Mahabodhi temple nearly 160 feet tall and a large fine sanctuary. Several additions and alterations took place and the present temple may be datable to the 6th century A.D. The temple fell into disuse in the 13th century A.D. after the conquest of this region by the Delhi Sultanate. During the 19th century, the Burmese kings made certain repairs which were continued by the British in 1880-84. 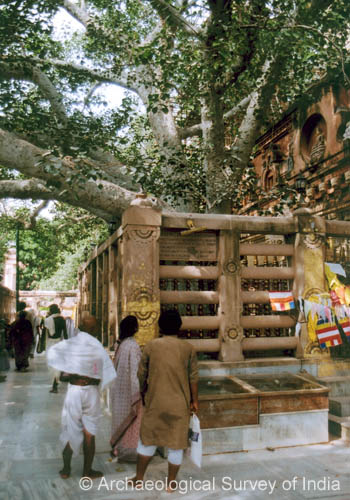 The temple covers an area of nearly 4.8 hectares and 55 m in height. The sanctum carries a lofty pancharatha sikhara of a straight-edged pyramidal design, demarcated into seven storeys by bhumi-amalakas (amalakas occurring at the corners of the sikhara to denote storeys).

The sacred Bodhi tree stands to the west of the above temple. It is known as the pipal tree (Ficus religiosa) in India. It is believed that this tree is the direct descendant of the original tree under which Lord Buddha meditated.