Group of Monuments at Mahabalipuram (1984)

Mamallapuram, the city of Mamalla, is after the title of great Pallava ruler Narasimhavarman-I (AD 630-68). It was a sea-port during the time of Periplus (1st century AD) and Ptolemy (AD 140) and many Indian colonists sailed to South-East Asia through this port town. While there is some evidence of architectural activity going back to the period of Mahendravarman-I (AD 600-30).

The father of Mamalla, most of the monuments like rock-cut rathas, sculptured scenes on open rocks like Arjuna’s penance, the caves of Govardhanadhari and Mahishasuramardini, the Jala-Sayana Perumal temple (the sleeping Mahavishnu or Chakrin at the rear part of the Shore temple complex) are attributed to the period of Narasimhavarman-I Mamalla.

Of the nine monolithic temples found in Mahabalipuram, the most important are Five Rathas known after the famous five Pandava brothers of the Mahabharata fame. These monuments are carved out a single rock with choice of all known forms of plan and elevations. While the Dharmaraja, Arjuna and Draupadi rathas are square on plan, the Bhima and Ganesa rathas are rectangular and Sahadeva ratha apsidal. 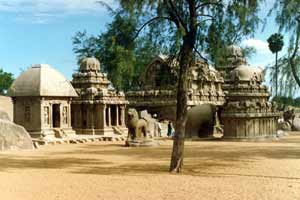 The Draupadi ratha is a simple hut like kutagara shrine while the Arjuna ratha is a dvitala vimana with a mukhamandapa. The Bhima ratha is rectangular on plan with a salakara wagon-vaulted roof. The Dharmaraja ratha is a tritala vimana having functional shrines at all the talas. The Nakula-Sahadeva ratha with an apsidal plan and elevation indicate the experimental tendency of the architect.

Though monolithic sculpturing, both cut-in and cut-out, continued even during later periods (Atiranachanda cave, Pidari rathas and Tiger-cave), the structural architecture was introduced on a grand scale by Pallava Rajasimha (AD 700-28), culminating in erection of the world famous Shore temple. The Shore temple is a complex of three temples, viz, Rajasimhesvara (a small tritala vimana facing west). 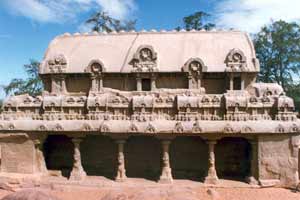 The Kshatriyasimhesvara (the larger east facing vimana) and Nripatisimha Pallava Vishnugriha (an east facing, oblong, flat-roofed mandapa shrine) housing the reclining Vishnu. These shrines are enclosed by two prakara walls with openings constructed in later times. The inner surface of prakara walls once contained panel sculptures which are worn out now.

The notable cave temples here are the Varaha mandapa, Mahisamardini mandapa, Paramesvara Mahavaraha Vishnugriha (Adivaraha cave). These are in the Mamalla style while the Adiranchanda caves temples belong to the Mahendra period.

The caves here were once plastered and painted as indicated by the remains. After Rajasimha, there is lull in the architectural activity of the place, save a few additions during late-Pallava and Chola times. The grandiose Vijayanagara phase here is represented by the Raja Gopurams and the Sthala-Sayana temple, juxtaposed to the carved boulder of Arjuna’s penance. 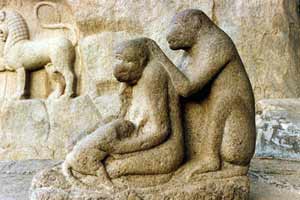 Recent excavations to the north and south of the Shore Temple have revealed rock-cut figures representing religious themes of period prior to the construction to the temple. Besides, a monolithic Bhuvaraha, a reclining image of Vishnu, the base of Durga shrine with deer and a square socket possibly to accommodate mahastambha have also been exposed. To the south of the Shore Temple was exposed a stepped ghat facing the sea. 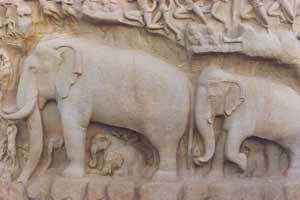