Among the structural temples, the Shore temple consisting of two graceful Siva temples – Kshatryasimhesvaram (east) and Rajasimhesvaram (west), built by Pallava King Rajasimha (AD 700-728), mark the culmination of the architectural efforts begun with the carving of monolithic rathas. The western shrine has an outer wall (prakara) and a simple entrance tower (gopura). The elevation is gracefully proportioned. Located in between is an earlier shrine for reclining Vishnu (Narapatisimha Pallavagriham). It has no superstructure. 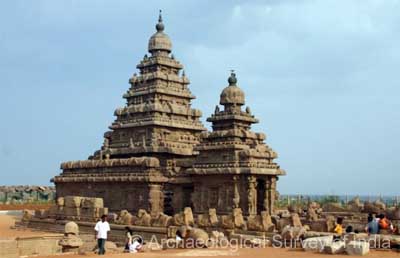 All the names of these shrines represent Rajasimha’s various titles. The outer enclosure with nandis is of later period. Fully aware of inherent problems of this scenic location, the architects built the temple on a rock outcrop jutting from the sea. The use of hard stones like granite and leptinite, could not stop the erosion by abrasive wind and salty surroundings. The groyne wall, the plantation and periodic extraction of salt in recent times have checked this effect. The outcrop itself was utilized for carving several masterpieces like the excavated miniature shrine, Bhuvaraha image, Vishnu shrine, and the Mahishamardhini shrine with the beautifully carved deer.

Other structural temples worth mentioning are the Mukundanayanar and Olakkanesvara temples