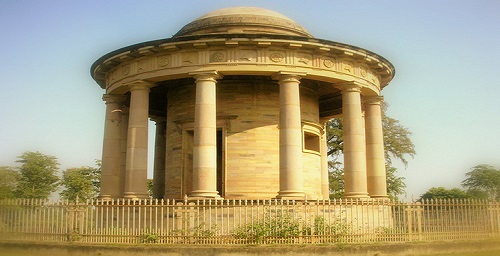 The tomb of Lord Cornwallis is located at Ghazipur, a small town in the eastern part of Uttar Pradesh approximately seventy kilometers east of Varanasi. It is well connected by road and railways with different parts of the country.

Lord Cornwallis is known as a great administrator and a successful commander-in-chief in the history of India during British period. He was appointed Governor General of India twice. The first tenure from September 1786 to October 1793 is remembered for his valuable contributions towards revenue reforms, judicature system and the second Mysore war. It was he who introduced the system of permanent settlement which is a landmark in the history of revenue reforms. His great reform in judicature was the establishment of Nizamat sadr adalat or the Supreme Court of criminal judicature at Calcutta. Further, he separated the functions of District Collector and Judge. It is believed that the foundation stones of civil administration in India were laid by his predecessor Hastings whereas the superstructure was raised by Cornwallis. He is known for his successful campaign of second Mysore war during 1790-92 in which he personally led the British army.

The reign of his successor John Shore (1793-98) was almost uneventful. But the time of Lord Wellesley the next Governor General (1793-1805) was full of wars and conquests which caused a financial strain and administrative chaos in the country.

In these circumstances Cornwallis was again sent to India for the second time in July 1805 to tighten the administration and establish peace at any cost. But unfortunately he could not serve longer. Only after ten weeks while traveling on his mission to north-west he died at Ghazipur on 5th October 1805 in the 67th year of his age. The British inhabitants of Calcutta erected this monument in his honour.

The tomb consists of a lofty dome supported by twelve columns erected on a 3.66 metres high circular platform, about 18.30 metres in diameter. The square structure of white marble raised at the centre of the platform bears the bust of Lord Cornwallis with a hindu and a muslim on either sides shown in the attitude of mourning, below which is an epitaph in English. The other side of this structure depicts a European and a native soldier paying homage with an epitaph below in Urdu. The exterior of upper portion of the tomb has been ornamented with army cap and floral motifs. The circular iron railing around the tomb with its gate toward south-east is beautifully fabricated with spears, bows & arrows, swords and inverted cannons.

Open from Sunrise to Sunset