Built in the thirteenth century, it was conceived as a gigantic solar chariot with twelve pairs of exquisitely-ornamented wheels dragged by seven rearing horses. The temple comprised a sanctum with a lofty (presumably over 68 m. high) sikhara, a jagamohana (30. m. square and 30. m. high) and a detached nata-mandira (hall of dance) in the same axis, besides numerous subsidiary shrines. The sanctum and the nata-mandira have lost their roof. 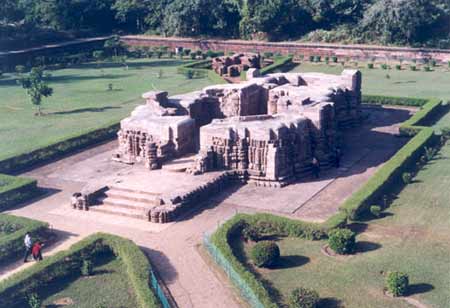 The roof of the jagamohana, made of horizontal tiers grouped in three stages with life-size female sculptures of matchless charm and delicacy adorning each stage, the whole surmounted by two stupendous crowning members, produces a picturesque contrast of light and shade and is unparalleled for its grandeur and structural propriety. Majestic in conception, this temple is indeed one of the sublimest monuments of India, notable as much for its imposing dimensions and faultless proportions as for the harmonious integration of architectural grandeur with plastic elegance. 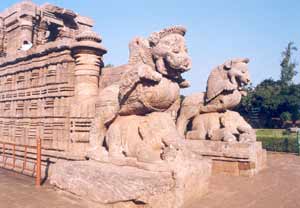 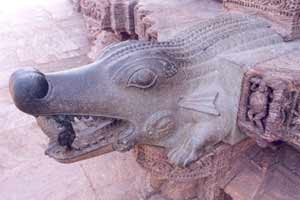 Mayadevi Temple :- To the west of the main temple are the remains of temple no.2 popularly called the temple of Mayadevi, believed to have been one of the wives of Lord Surya. But the presence of the sun images as parsvadevata in-situ indicate its dedication to the sun god, built earlier than the main Sun temple. The temple facing east, consists of a sanctum (deul) and a porch (Jagamohana) standing over a raised platform, façade of which is relieved with ornamentation. The superstructures of the sanctum and porch are missing. The interior of the porch is notable for their sculptural treatment while the sanctum is devoid of any deity. Stylistically, the temple is assignable to circa late eleventh century AD.

Vaishnava Temple:- The small brick temple facing east in south-west corner of the compound was discovered in 1956 during the sand clearance. Also called temple no.3 is pancharatha on plan. It consists of a deul and a Jagamohana but with the superstructure is missing and devoid of any exterior decoration. Images of Balarama and two parsvadevatas of Varaha and Trivikrama were unearthed (now displayed in Archaeological Museum, Konark) proving its Vaishnava affiliation. The temple is datable to circa eleventh century A.D.