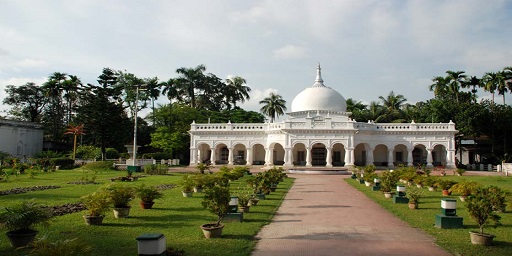 Koch Bihar (26°19′ N; 89°26′ E) Headquarters of the district with same name is situated at a distance of 693 Km from Kolkata by rail and connected by good road as well. At the heart of the town is located the magnificent Palace of the erstwhile rulers of the Princely State. The Palace built by Maharaja Nripendranarayan in 1887 situated within a vast enclosure had sprawling gardens on all sides and some tanks. Approach is obtained through a spacious carriageway from the east, the main entrance is through an imposing portico, on either side of which are seen one of the two guns presented by the British Government to the King in 1865 on the conclusion of the Bhutan War.

The palace designed by an architect Mr. F. Barckley is well proportioned, with the main building, turrets and spires in red brick, with the caps and bases of pilasters and archivolt mouldings and key stones in buff -terracotta, while the dome is of Iron. It is designed after the classical style of architecture. The main building is a well-defined two-storey one, raised 1.5 m above the ground surface. It covers an area of 4768.5 sq.m. including the two courtyards, and is 120 m long from north to south, and 90 m from east to west. The wooden staircases, vestibule, ladies gallery at the first floor giving a view to the happenings in the Durbar Hall are the added attractions of the palace.

The facade of the palace presents a grand and elegant appearance. It consists of a range of arcades on the ground and first floors, a pleasing effect is obtained through the projections of the building slightly beyond the regular line at the ends in the northern and southern side. Alternate use of narrow and broad piers in the arcades also adds to the beauty of the architecture, the narrow ones have a single Corinthian pilaster of the face, and the broad ones a wide rusticated pilaster in the centre with a Corinthian pilaster on either side of it.

The dome, the main feature in the facade is dodecagon (twelve sided) in shape, is elegantly proportioned, and being surmounted by a lantern of suitable size, and flanked in front by two neatly designed and well executed towers, the tops of which are 102 feet above the ground, gives a dignified and graceful appearance to the whole building. The skyline in this facade is most pleasingly broken by the pavilions on the north and south ends and by the dome and the roofs over the staircases on the north and south of the Durbar Hall. The north front of the building is varied in design at different parts which gives it a rich and picturesque effect.

The Durbar Hall, a majestic apartment, is roofed by the dome which towers above the floor. Durbars were held here at particular times in the year, when the hall was fitted up in Eastern style and the ancestral gadi brought out and placed in state. The central portion of the Durbar Hall is square at the level of the floor with a massive masonry pier at each comer. These piers support four large semi-circular arches each span one on each side of the hall.