Khajuraho, the ancient Kharjjura-vahaka represent today a distinct pattern of art and temple architecture of its own reminding one of the rich and creative period it witnessed during the Chandella rule. 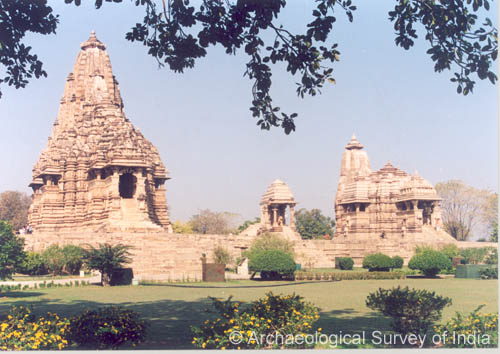 It was the principal seat of authority of the Chandella rulers who adorned it with numerous tanks, scores of lofty temples of sculptural grace and architectural splendour. The local tradition lists eighty-five temples but now only twenty-five are standing examples in various stages of preservation. But for Chausath-Yogini, Brahma and Mahadeva which are of granite, all the other temples are of fine grained sandstone, buff, pink or pale yellow in colour.

Yasovarman (AD 954) built the temple of Vishnu, now famous as Lakshmana temple is an ornate and evolved example of its time proclaiming the prestige of the Chandellas. 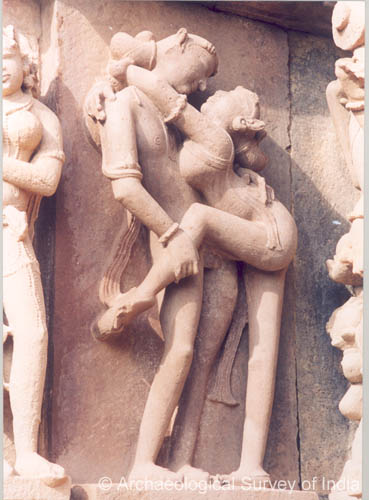 The Visvanatha, Parsvanatha and Vaidyanatha temples belong to the time of king Dhanga, the successor of Yasovarman. The Jagadambi, Chitragupta, are noteworthy among the western group of royal temples of Khajuraho. The largest and grandest temple of Khajuraho is the immortal Kandariya Mahadeva which is attributed to king Ganda (AD 1017-29). The other examples that followed viz., Vamana, Adinatha, Javari, Chaturbhuj and Duladeo, are smaller but elaborately designed. The Khajuraho groups of temples are noted for lofty terraces (jagati) and functionally effective plans comprising of an ardhamandapa, acting as entrance generally adorned with makara torana and kakshasana, the mandapa, as the hall with antarala leading to garbha griha or sanctum. The larger temples have mahamandapas in front of the ardhamandapa. They also have minor shrines at four corners and thus categorized as pancayatana. The exterior of the temples are richly decorated. In contrast, Javari and Brahma temples are simpler creations. 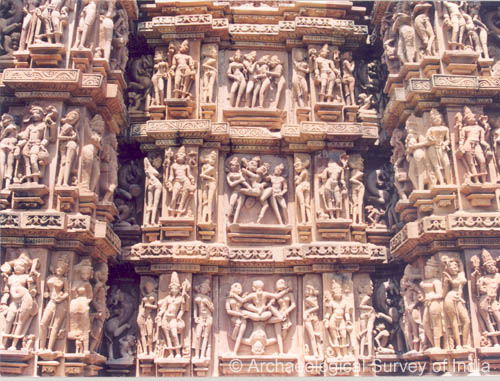 The sculptural embellishments include, besides the cult images; parivara, parsva, avarana devatas, dikpalas, the apsarases and sura-sundaris which win universal admiration for their delicate, youthful female forms of ravishing beauty. The attire and ornamentation embrace the winsome grace and charm.

The recent excavation at Bija Mandal in Jatkara near Khajuraho has revealed the remains of a huge temple base datable to 11th century A.D. which extends over 4 m than the largest known temple (Kandariya Mahadeo Temple). An exquisite image of Sarasvati was also found from here.