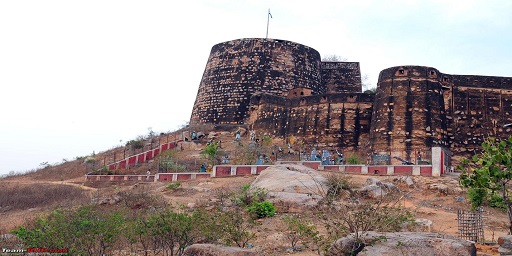 Situated on the southwestern fringe of the state of Uttar Pradesh, the city of Jhansi is esteemed to be one of the greatest centres of freedom struggle in India. Every Indian is proud of the patriotism, chivalry and supreme sacrifice of Rani Laxmi Bai of Jhansi during the freedom struggle of India. In ancient times, the region fell under ‘Chedi desa’ or ‘Chedi rashtra’, ‘Jejak-bhukti’ and Bundelkhand, respectively. The fort was built by Raja Bir Singh Deo in 1613 on the hill known as Bangara.

According to a legend, Raja Bir Singh Deo, sitting on the roof of his palace at Orchha with his friend, the Raja of Jaitpur asked the latter whether he could discern this new fort that he built on Bangara hill, he replied that he could see it ‘Jhainsi’ (meaning rather indistinct). This ‘Jhainsi’ in course of time became corrupted to Jhansi. It was one of the most strategically situated forts of central India being built on an elevated rock rising out of the plain and commanding the city and the surrounding country.

The fort remained with Bundellas for twenty-five years only and thereafter was taken over by the Mughals for next 100 years. In 1729-30, it come in possession of Maratha rulers. Naru Shankar, a Maratha Chief, made alterations and additions to this fort which also came to be known as Shankargarh, largely owing to construction of a Siva temple here. He in also credited to have founded the city of Jhansi which extends to an area of 7.3 Km in circumference. The city wall and its main gate were added by Shiv Rao Bhau during A.D. 1796-1814.

Marathas continued to rule Jhansi upto 1853 when Raja Gangadhar Rao expired. After his death, his adopted son Damodar Rao ascended to throne under the regentship of Rani Laxmi Bai. But the British did not recognise their claim to throne and declared the state as having lapsed to the British government. This illegal annexation of Jhansi created great discontent among the Maratha and Bundella chiefs of the region which was further aroused by the freedom struggle waged in 1857.

On Feb, 14, 1858, Rani issued a proclamation appealing to all Hindu & Muslim brethren to join the fight against the British rule. She was assisted by Raja Mardan Singh of Banpur and Nana Saheb. Tatya Tope joined her in March and the great struggle begun. Rani Laxmi Bai prepared her army and showing exemplary courage, valour and organizing capacity led her troops from the fort. The British troops fought in command of Hugh Rose for seventeen days. The besieging British battalions and cavalry kept on pounding the fort with their artillery but they failed to breach the walls which were very thick and of great strength. Rani put forward a resolute and spirited defence and returned the fire with equal vigour.

Rani herself took part in operations and encouraged her soldiers in person placing herself at the head of the Afghan battalions. She fought with a sword in each hand, holding her horse’s reins in her mouth. Many deeds of heroism were performed. Men & women preferred to kill themselves rather than fall into hands of enemy and fought like tigers. Having suffered heavy casualties, British forces were finally able to capture the fort as well as the city. Rani let herself with Damoder Rao (her adopted son), down from a turret window on the night of April 4 and escaped on a horse.After her escape from Jhansi, Rani rode on to Kalpi engaging in fierce fighting on the way. She further moved to Gwalior and captured the fort. Hugh Rose after loosing many battles finally won the battle of Gwalior on June 19 and captured the fort the next day.

Rani died mortally wounded. Her body was cremated and her wish that it should not fall into British hand, was fulfilled. Rani Laxmi Bai has been given a place amongst the greatest women in the history of the world and is an illustrious figure in Indian history.The British generals were aghast at here daring. Hugh Rose described her as ‘the bravest and best military leader of rebels’. The fort proper has occupied an area of 15 acres and measures 312m in length and 225m in width. Altogether, there are twenty-two bastions with a huge fortification wall protected by a moat on two sides. A bastion on the eastern side was destroyed, which was reconstructed by the British, who also added a floor to Panch Mahal.

The fort can be divided in three parts keeping in view the different stages of its constructions:- Baradari, Shankergarh and Panch Mahal. Besides, the fort contains many ancient structures of great importance. The old city wall had ten gates known as Khanderao, Datia, Unnao, Orchcha, Baragaon, Lakshmi, Sagar, Sainyar, Bhander and Jhirna. The first eight still have wooden doors and of the last two, the former is completely closed and the latter is open. A breach in the wall between Sainyar gate and Jhirna gate, which was made by Hugh Rose’s batteries during the assault on the fort in 1858, is still in existence. There are also four khirkis (entrances) made in the walls-Ganpatgir-ki-Khirki, Alighol-ki-Khirki, Sujan khan- ki-Khirki and Sagar Khirki. The main structures within the fort are Baradari, Ganesh mandir, Shahar Darwaza, Bhawani shnakr, Kadak bijali, Grave of Gulam Gaus Khan, Panch Mahal, Siva temple, Execution tower, Kal kothari, etc