Humayun died in 1556, and his widow Hamida Banu Begam, also known as Haji Begam, commenced the construction of his tomb in 1569, fourteen years after his death. It is the first distinct example of proper Mughal style, which was inspired by Persian architecture. It is well known that Humayun picked up the principles of Persian architecture during his exile, and he himself is likely to have planned the tomb, although there is no record to that effect. The tomb was constructed at a cost of 15 lakh rupees (1.5 million). 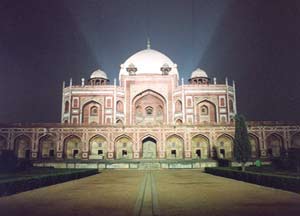 Mirak Mirza Ghiyath, a Persian, was the architect employed by Haji Begam for this tomb.

The tomb proper stands in the centre of a square garden, divided into four main parterres by causeways (charbagh), in the centre of which ran shallow water-channels. The high rubble built enclosure is entered through two lofty double-storeyed gateways on the west and south. A baradari (pavilion) occupies the centre of the eastern wall and a hammam (bath chamber) in the centre of northern wall.

The square red sandstone double-storeyed structure of the mausoleum with chamfered corners rises from a 7-m. high square terrace, raised over a series of cells, which are accessible through, arches on each side. The grave proper in the centre of this cell-complex is reached by a passage on the south. The octagonal central chamber contains the cenotaph, and the diagonal sides lead to corner-chambers which house the graves of other members of the royal family. Externally each side of the tomb, its elevations decorated by marble borders and panels, is dominated by three arched alcoves, the central one being the highest. Over the roof pillared kiosks are disposed around the high emphatic double dome in the centre. The central octagonal chamber contains the cenotaph, encompassed by octagonal chambers at the diagonals and arched lobbies on the sides. Their openings are closed with perforated screens. Each side is dominated by three arches, the central one being the highest. This plan is repeated on the second storey too. The roof surmounted by a double dome (42.5m) of marble has pillared kiosks (chhatris) placed around it. 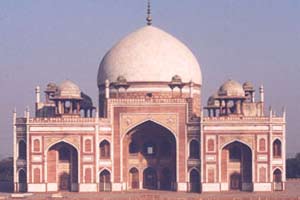 The mausoleum is a synthesis of Persian architecture and Indian traditions-the former exemplified by the arched alcoves, corridors and the high double dome, and the latter by the kiosks, which give it a pyramidal outline from distance. Although Sikandar Lodi’s tomb was the first garden-tomb to be built in India, it is Humayun’s tomb which set up a new vogue, the crowning achievement of which is the Taj at Agra. There is also a somewhat common human impetus behind these two edifices-one erected by a devoted wife for her husband and the other by an equally or more devoted husband for his wife.

Several rulers of the Mughal dynasty lie buried here. Bahadur Shah Zafar had taken refuge in this tomb with three princes during the first war of Independence (AD 1857).

On the southwestern side of the tomb is located barber’s tomb (Nai-ka-Gumbad) which stands on a raised platform, reached by seven steps from the south. The building is square on plan and consists of a single compartment covered with a double-dome.