Group of monuments at Hampi (1986), Karnataka

Traditionally known as Pampakshetra of Kishkindha, Hampi is situated on the southern bank of the river Tungabhadra. Once it was the seat of the mighty Vijayanagara empire.

The monuments of Vijayanagara city, also known as Vidyanagara in honour of the sage Vidyaranya were built between AD 1336-1570, from the times of Harihara-I to Sadasiva Raya. A large number of royal buildings were raised by Krishnadeva Raya (AD 1509-30), the greatest ruler of the dynasty. The period witnessed resurgence of Hindu religion, art, architecture in an unprecedented scale. The contemporary chroniclers who came from far off countries-such as Arabia, Italy, Portugal and Russia visited the empire, have left graphic and glowing accounts of the city. It covers an area of nearly 26 sq km and is stated to be enclosed by seven lines of fortifications.

Extensive remains of the palaces can be seen within innermost enclosure of the ancient Vijayanagara. The various religious and secular structures which include Hindu and Jaina temples, audience hall of the king, the magnificent throne platform to witness the festivals and other events, the king’s balance (tulabhara) are awe-inspiring.

Temples of this city are noted for their large dimensions, florid ornamentation, bold and delicate carvings, stately pillars, magnificent pavilions and a great wealth of iconographic and traditional depictions which include subjects from the Ramayana and the Mahabharata. The largest extant temple is that of Pampapati (now in worship) was extensively renovated. Its magnificent entrance tower was caused by Krishnadeva Raya. The Vitthala temple is an excellent example of Vijayanagara style. The monolithic statues of Lakshmi, Narasimha and Ganesa are noted for their massiveness and grace. 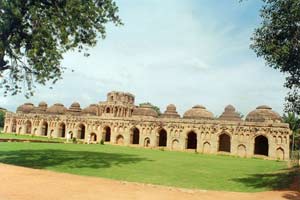 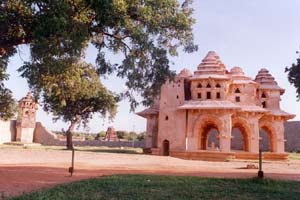 The Krishna temple, Pattabhirama temple, Hazara Ramachandra and Chandrasekhara temple as also the Jaina temples, are other examples. Majority of these temples were provided with widespread bazaars flanked on either side by storeyed mandapas. Among secular edifices mention may be made of the Zenana enclosure wherein a massive stone basement of the Queen’s palace and an ornate pavilion called ‘Lotus-Mahal are only remnants of a luxurious antahpura. The corner towers of arresting elevation, the Dhananayaka’s enclosure (treasury), the Mahanavami Dibba carrying beautifully sculptured panels, a variety of ponds and tanks, mandapas, the elephant’s stables and the row of pillared mandapas are some of the important architectural remains of this city. 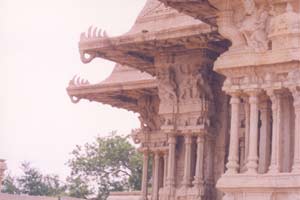 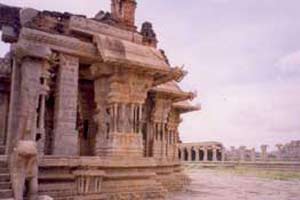 Recent excavations at the site have brought to light a large number of palatial complexes and basements of several platforms. Interesting finds include a large number of stone images, both in round and relief, beautiful terracotta objects and stucco figures that once embellished the palaces. In addition many gold and copper coins, household utensils, a square stepped-tank (sarovara) at the south-west of Mahanavami Dibba, and a large number of ceramics including the important variety of porcelain and inscribed Buddhist sculptures of 2nd -3rd century AD have also been unearthed. 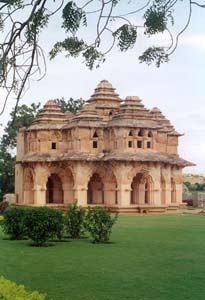