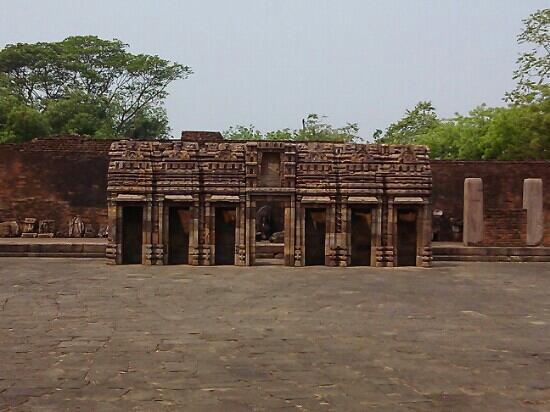 Ratnagiri or the hill of jewels (Lat. 200 38’ N; Long. 860 20’ E) in the district of Jajpur is situated on an isolated hill of Assia range. It is 100 km away from Bhubaneswar, the state capital through NH-5 and forms the Buddhist diamond triangle comprising two other sites namely Lalitgiri and Udayagiri. The ancient Buddhist remains are situated atop a flat hillock sandwitched between the rivers Brahmani and Birupa.

Excavation of this site brought to light the remains of a magnificent Buddhist establishment consisting of a stupa, monastic complex, shrines, votive stupas, myriad of sculptures, architectural fragments and other antiquities hitherto unparalleled in Orissa and aptly comparable to the well known Buddhist site of Nalanda. On the basis of the sealings bearing the legend “Sri Ratnagiri Mahavihariya Arya Bhikshu Sanghasa” the place has been identified as Ratnagiri.

Hieun T’sang the Chinese pilgrim,who visited Orissa during 639 A.D. left a vivid graphic account about the flourishing state of Buddhism. However, the constructional activities at Ratnagiri got special impetus under the royal patronage of the Bhaumakaras (9th-10th cent A.D).

The excavations unearthed the structural remains of a large brick stupa No.1 (Mahastupa) situated on the south-western flank of the highest part of the hill that commands a view from the large distance. The stupa has elaborate square base measuring 14.35 m each side while superstructure is now partially missing. It consists of five recesses and six projections. Its height from the base to top is 5 m. The space between the two walls served as a circumambulatory pathway. The evidence shows that this 9th cent A.D stupa was built over the plinth of an earlier edifice. The area around the stupa is covered with numerous votive stupas of varying dimensions made of either brick or stone.

The high mound locally called Ranipokhari or queen’s tank is located to the north of Mahastupa. The excavation of the site revealed the spectacular remains of two monasteries lying side by side with a narrow passage in between, both face the mahastupa. The large one is earmarked as monastery no.1.facing south, this monastery is chatusala in plan and measures 55 sq. m approximately (externally) and with 24 cells with a spacious stone paved central courtyard of 21 sq. m. It is the largest excavated monastery in Orissa made essentially of brick but externally veneered with khandolite to make the entire composition very attractive. The monastery has pancharatha projection in front of its entrance.

The exquisitely carved chlorite door-frame with Gaja-Lakshmi on the lintel and the bands of floral, creeper and manusyakautaki motifs betray the superb craftsmanship in its artistic exuberance and graceful charm. The ornate doorway of the monastery is unique of its kind and marks the highest watermark of decorative art of India. The sanctum enshrined with a massive seated Buddha is in bhumisparsamudra flanked by the standing figures of Padmapani and Vajrapani holding chamaras on each side. The façade of the sanctum is embellished with creeper pattern and elegant figures of door keepers. The construction of monastery is assignable to 8th-9th century A.D.

The monastery no.2 measures 29 sq. m (externally) inconformity with its counterpart is made essentially of brick, though the use of stone restricted to door frames, windows, kerbs of verandah and pavement, etc. The sanctum houses a standing khandolite image of Buddha in varada mudra flanked by diminutive figures of Indra and Brahma indicating the miracle of Sankisa. This monastery is immediate posterior to monastery no.1. Besides, the excavation also laid bare the remains of eight brick temples representing typical Orissan temple architecture datable to circa 9th-10th cent. A.D.

An isolated single winged monastery consisting of three cells and a verandah to the north east of monastery no.1 near museum building was also brought to light.Of late, the scientific clearance work (1997-2004) of Dharma Mahakala temple area unearthed ruins of a stupa and a shrine along with votive stupas, sculptures representing Buddhist divinities. The most outstanding discovery is a huge standing jatamukuta Avolokitesvara with an inscription datable to circa 10th-11th cent A.D.

Since Mahakala temple built over the remains of earlier Stupa was in religious use, it was therefore decided to transplant the temple in order to preserve remains of Stupa. The temple has now been successfully transplanted on the south west slope of the same hillock.

The excavation of site yielded a rich crop of antiquities including the stone and bronze images of Buddha and a host of other divinities like Tara, Lokesvara, Vajrapani, Padmapani Aparajita, Heruka, Sambhara and Hariti, etc. These sculptures are the finest products of post Gupta period of Indian art and remarkably preserve the Gupta idiom. A life size image of asthmahabhaya form of Tara depicting as savior of her followers from eight different hazards,. More than two dozens of colossal heads of Buddha of various dimensions reflecting the skill of artist with striking resemblance to their counterparts at Borbodur in Java and Anuradhapur in Sri Lanka are among the findings.From the available evidence it has been established that the constructional activities started at Ratnagiri as early as 5th cent A.D and continued till 13th cent A.D.

The excavated remains at the site open from sunrise to sunset. Entry fee for Citizens of India and visitors of SAARC (Bangladesh, Nepal, Bhutan, Sri Lanka, Pakistan, Maldives and Afghanistan) and BIMSTEC Countries (Bangladesh, Nepal, Bhutan, Sri Lanka, Thailand and Myanmar) – Rs. 25 per head and foreign visiter 300.00 while children below 15 years are not required to pay any charge.

The varieties of antiquities retrieved from the excavation have been housed and displayed in the four galleries of the newly constructed attractive site museum to the north-west corner of the hillock is definitely worth visiting.Entry fee for each individual is Rs. 25.00 only. The museum remains open from 10 AM to 5 PM and Friday is closed.