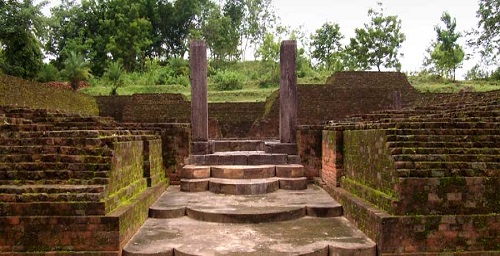 Ticketed Monuments – Orissa
Lalitgiri, locally known as Naltigiri (Lat. 20 35” N and Long. 86 15” E) in Birupa-Chitrotpala valley is one among the major centers of Buddhism in the Mahanga Tahsil of Cuttack district. It is 90 km. away from the state capital, Bhubaneswar. The site is couched between hills of Parabhadi and Landa of the isolated Assian range.

The archaeological treasures of the hills and its vicinity were first brought to light by M.M.Chakravarty, the then Sub Divisional Officer, Jajpur in 1905. Subsequently in 1927-28, R.P.Chanda of Indian Museum Kolkatta made reference of Lalitgiri in the Memoirs of Archaeological Survey of India. The site was declared centrally protected monument in the year 1937.

A small scale excavation was attended at Lalitgiri by Utkal University in 1977. The Bhubaneswar circle of the Archaeological Survey of India carried out extensive excavations at Lalitgiri between 1985-1991. The excavation has revealed the remains of a massive stupa on hill top. In side the stupa two relic caskets kept in a container made of Khandolite stone were found. The discovery of relic caskets was the first of its kind in the eastern India. Within the stone container, a steatite, a silver and a gold casket inside one another were also recovered. The inner-most gold casket contained the relic or dhatu in the form of a small fragment of bone. These un-inscribed caskets were arranged in the manner of Chinese puzzle box.

Another important discovery of the site was structural remains of an east facing large brick built apsidal chaityagriha measuring 33 x 11 m with 3.3.m thick wall with a circular stupa in the center of chaityagriha. The discovery of such edifice is also first of its kind in the Buddhist context in Orissa. Other important finds from this area are the Kushana Brahmi inscriptions, a series of shell inscriptions deeply incised on moonstone of the threshold of the edifice, a fragmentary pillar railing having lenticular socket with half lotus medallion motif, etc. The above evidence suggests that the aforesaid structure remained in use from early Christian era to circa 6th-7th century.

The archeological excavation of the site further yielded the remains of four monasteries. Among these, the east facing double storied monastery no.1 is the largest one and measures 36 sq.mtr (externally) with a 12.9 m square courtyard in the centre. It is datable to 10th-11th century AD. A large brick built cistern abutting the natural bedrock was also brought to light probably meant for storing rain water which was constructed at the backside of the monastery. Partially exposed monastery no.2 in the extreme north side of the hill was built during the decadence phase of Buddhism at Lalitgiri. Monastery no.3 facing south-east, measures 28 x 27 m with a courtyard of 8 sq. m in the centre is the earliest in the complex and goes well with the last phase of apsidal chaitya. The west facing monastery no.4 which measures 30 sq. m, enshrines a massive headless Buddha images in the sanctum. One terracotta monastic seal which reads “Sri Chandraditya Vihara Samagra Arya Vikshu Sanghasa” datable to 9th-10th century A.D unearthed during excavation is one among the important findings of Lalitagiri.

Majority of the sculptures unearthed from excavation are the figures of Buddha in different postures belonging to Mahayanistic phase of Buddhism. Among the other antiquities, a gold pendant, silver ornaments, stone plaques of Ganesha and Mahisasurmardini, a seal matrix-cum-pendant, a tiny figure of Avloketisvara deserve special mention.Apart from these, inscribed potsherds belonging to different time spans i.e. post Mauryan period to 8th-9th century A.D. suggest that the Lalitagiri was under occupation by the both Hinayana and Mahayana sects. In subsequent period the site came under the control of Vajrayana faith of Buddhism patronized by the ruling Bhaumakaras (9th-10th cent A.D).Thus, Lalitgiri is one of the earliest Buddhist sites of Orissa shows the cultural continuity right from the post Mauryan period to 13th cent A.D without any break.

A small sculpture shed has also been erected at the site to keep the sculptures collected from the ancient site and also recovered during excavation; a few of them have also been displayed temporarily. The excavated site remains open from sunrise to sunset.