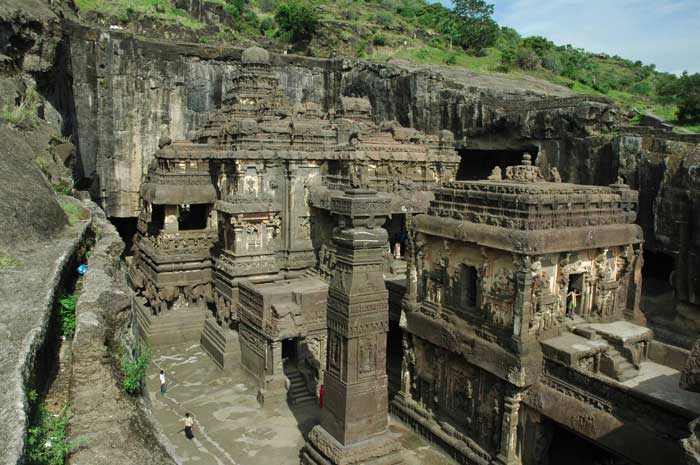 he Ellora caves, locally known as ‘Verul Leni’ is located on the Aurangabad-Chalisgaon road at a distance of 30 km north-northwest of Aurangabad, the district headquarters. The name Ellora itself inspires everyone as it represents one of the largest rock-hewn monastic-temple complexes in the entire world. Ellora is also world famous for the largest single monolithic excavation in the world, the great Kailasa (Cave 16). The visit to these caves is enjoyed maximum during monsoon, when every stream is filled with rainwater, and the entire environ is lush green. The monsoon is not only a season of rains in this part, the local visitors are attracted to visit these ideal locations to have a glimpse of the mother nature in full bloom. 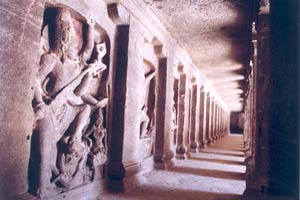 The caves are hewn out of the volcanic basaltic formation of Maharasthra, known as ‘Deccan Trap’, the term trap being of Scandinavian origin representing the step like formation of the volcanic deposits. The rock formation, on weathering has given rise to the appearance of terraces with flat summits. At Ellora, one can also have a glimpse of the channels (near Cave 32) through which the volcanic lava once flowed. These channels, due to overheating, have a characteristic brownish red colour. Similar rock was used in the construction of the Grishneshwar Temple nearby and also utilised for the flooring of the pathways at Bibi-ka-Maqbara.

The hills in which the caves are hewn, forms part of the Sahyadri ranges of the Deccan and dated to the Cretaceous era of the Geological time scale (about 65 million years ago). The hills rise abruptly from the surrounding plains on the south and west, the western surface being extensively utilised for hewing the cave complexes. The hill also supports several streams, the prominent among them being the Elaganga, which drains into the Shiv, a stream of the Godavari river system. The Elaganga is in its full vigour during the monsoon, when the overflowing waters of a barrage in the upstream near Mahismati allows the gushing waters to land at “Sita-ki-nahani” near Cave 29 as a crashing waterfall.

The volcanic lava flowed during different periods, gave rise to extensive horizontal flows alternating with vesicular trap beds. The vesicular traps formed the upper portion of each of the massive trap beds. The different lava flows also gave rise to vertical as well as horizontal joints in the rock formation. Depending upon the nature and mineralogical content of the lava flow, the rock formations also varied in character and texture, giving rise to various qualities like coarse grained, fine grained formations. The ancient builders at Ellora, like other places, particularly chose the fine grained formations of the Deccan trap, ideal for sculpting and rock hewing. In addition to this, the ancient builders also traced the horizontal and vertical joints in the rock formation to minimise the labour and time during excavation and rock splitting. The basaltic rock is also ideal for rock hewing, as they are soft during the initial excavation and hardens on exposure to environment.

The basaltic formation of the Deccan is ideal for rock hewing, the technique widely understood during ancient times. This induced the religious followers of various creeds to establish their settlements in them. By a rough estimate, there are nearly 1200 caves of varying sizes in the entire Maharashtra, out of which nearly 900 alone belong to Buddhism.

The region is also famous for its antiquity. It has been inhabited since time immemorial, the stone tools belonging to the Upper Palaeolithic (around 10,000 to 20,000 years ago), Mesolithic (less than 10,000 years ago) bearing testimony to this fact. The Chalcolithic remains (2500-1000 BC) in the vicinity also indicates the continuity of human occupation in this region. 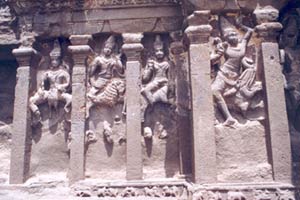 The importance of Ellora during the early centuries of the Christian era is also understood by the findings of coins of Satavahanas, the ruling dynasty during the period. The Satavahanas had their capital at Pratishtana (modern Paithan) and ruled the entire area between the Arabian Sea and Bay of Bengal and bordered by the Narmada River on the north. Ellora being located on the ancient trade route connecting the western ports on the Arabian sea like Sopara (Surparaka, the Supara of Greek; Subara of Arab writers; the ancient capital of northern Konkan), Kalyan a thriving port; Chemula, the Samylla of Greek geographers, Chemula of Silaharas, on the island of Trombay and the inland cities like Paithan (Pratishtana), Ter (Tagara), Bhokardan (Bhogavardhana) etc. The fact that Satavahanas traversed this region is attested by their inscriptions at Nasik caves and donor inscriptions of their times at Pital Khora caves, located at a distance of 40 km west of Ellora. Ellora is located directly on the ancient trade route which traversed from Pratishtana via Aurangabad, Ellora, Pital Khora, Patne, Nasika (modern Nasik). Nasik is at the crossroads of an ancient trade route connecting centres on the west to east and those on the north to south.

The location on the ancient trade route did not induce any activities at Ellora during the Satavahana rule. Brisk activities were already on at nearby Pital Khora, Nasik, Ajanta, etc., and this could have been a diversion of the ancient builders to support any activity here. However, as the multiplication of the religious establishments took place in every nook and corner of Maharashtra, the ideal location of Ellora was unavoidable.

Thus grew one of the largest cave excavations at Ellora, that too of three different religious creeds, viz., Buddhism, Brahmanism and Jainism. The caves are datable from circa 6th – 7th century A.D. to 11th – 12th century A.D. In total, there are nearly 100 caves in the hill range out of which 34 caves are famous and visited by many tourists, out of which Caves 1 to 12 are Buddhist; Caves 13 to 29 are Brahmanical and Caves 30 to 34 are Jaina. Two more groups of caves are noticed on the Elaganga and on an upper terrace, namely, the Ganesh Leni and Jogeshwari Leni.

These religious establishments could have received royal patronage from various dynasties, even though inscriptional evidences are lacking for most of them. The only definite inscriptional evidence is that of Rashtrakuta Dantidurga (c. 753-57 A.D.) on the back wall of the front mandapa of Cave 15. The Great Kailasa (Cave 16) is attributed to Krishna I (c. 757-83 A.D.), the successor and uncle of Dantidurga. A copper plate grant from Baroda of the period of Karka II (c. 812-13 A.D.) speaks about the greatness of this edifice. The inscription tells us that this great edifice was built on a hill by Krishnaraja at Elapura (Ellora) and even the celestial beings moving in the sky were struck by its magnificence, as though it was self-existent, not created by mortals, and, even the architect who caused it was wonder struck that he could build it. Apart from the above two inscriptions, the entire cave complexes lack inscriptions of the nature found at other cave sites like that of Ajanta, Nasik, Karle, Kanheri, etc.

In the absence of concrete inscriptional evidence, we can deduce the royal dynasties that could have extended their patronage to the religious establishments. The initiation of religious establishments at Ellora coincides with the departure of the tradition at Ajanta. It is well known that the excavations started here before the Rashtrakutas arrived on the scene and the Caves 1 to 10 and Cave 21 (Ramesvara) were definitely constructed before them. These excavations are generally attributed to the Kalachuris of Mahismati, appeared to have gained control of the region around Nasik and parts of ancient Asmaka (region around Aurangabad) including Bhogavardana (modern Bhokardan) and the Chalukyas of Badami who held their sway in this region for a brief period before their feudatories, the Rashtrakutas took over.

The majority of the Brahmanical establishments and the remaining Buddhist ones can be attributed to the Rashtrakuta times which indicate the religious tolerance of the contemporary period. The Jaina caves definitely post-date the Rashtrakutas as indicated by the style of execution and fragmentary inscriptions. This region was under the control of Kalyani Chalukyas and Yadavas of Deogiri (Daulatabad) during this period. The patronage towards Jainism under the Yadavas is also known by the findings of several sculptures of Jaina faith from Daulatabad. Thus, we have the greatest religious conglomeration at a single place, signifying the religious tolerance and solidarity of different faiths.

The Ellora caves, unlike Ajanta, have a distinction that they were never lost to oblivion, due to their close proximity to the trade route. There have been numerous written records to indicate that these caves were visited regularly by enthused travellers and royal personages as well. The earliest is that of an Arab geographer Al-Mas‘udi of the 10th century A.D. In 1352 A.D. the approach roads to the caves were repaired on the ensuing visit of Sultan Hasan Gangu Bahmani, who also camped at the site and visited the caves. The other important accounts of these caves are by Firishta, Thevenot (1633-67), Niccolao Manucci (1653-1708), Charles Warre Malet (1794), Seely (1824). During the 19th century A.D. these caves were owned by the Holkars of Indore who auctioned for the right of worship and leasing them for religious as well as a form of entrance fee. After the Holkars, these caves passed into the control of Nizams of Hyderabad, who through their Archaeology Department carried out extensive repairs and maintenance of the caves under the guidance of Archaeological Survey of India. The caves are under the maintenance of the Archaeological Survey of India after the reorganisation of states and the dominions of erstwhile Nizams merged into the state of Maharashtra.

A brief account on the architectural splendour and artistic expressions of various caves is given here for enabling one to understand the real character and importance of this wonderful place.

A tourist can plan the visit of these caves according to the time available and depending upon the interest in ancient art. If a visitor has at his disposal three to four hours, then the Cave nos. 10 (Visvakarma Cave), 16 (Kailasa), 21 (Ramesvara) and 32 & 34 (Jaina group of caves) should not be missed. Thus, by visiting these caves, one can have a glimpse of the representative art of Buddhism, Brahmanism and Jainism. If a visitor has an entire day at his disposal, the Cave nos. 2, 5, 10 & 12 of the Buddhist group; Cave nos. 14, 15, 16, 21 & 29 of the Brahmanical group and Caves 32 to 34 of the Jaina group should be visited.

The caves are excavated in the scarp of a large plateau, running in a north-south direction for nearly 2 km, the scarp being in the form of a semi-circle, the Buddhist group at the right arc on the south, while the Jaina group at the left arc on the north and the Brahmanical group at the centre.

Open from sunrise to sunset
Closed on Tuesday

Entrance Fee:
Citizens of India and visitors of SAARC: