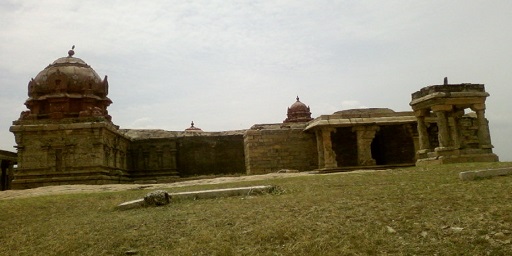 Dindigul located about 400 km from Chennai, is a strategic place located overlooking the valley through which the forces from Karnataka country gained access into the Madurai in late medieval period. The Nayakas of Madurai possibly erected the first fortification on the rock, a prominent elevated place overlooking the valley, in order to defend their country from the invading Mysore army. However, Haider Ali seems to have rebuilt the fort substantially as he used this as a launching pad to attack the British in this region during the Carnatic wars. The British finally captured the fort in 1790 and garrisoned it till 1860. The irregular curtain wall of the fort is well built of dressed and finely jointed stone blocks with brick crenulations. There are number of cells in the rampart for the use of troops. There are number of brick structures on the top, possibly built during the British period. There is a circular freestanding bastion on the top at a strategic location on which several cannons were mounted. There is one canon of English origin now preserved over the bastion.

Vijayanagara rulers as indicated by the inscription built the temples on the summit. Among them, the central shrine is noteworthy for the delicately carved architectural members and the moulded brick elements of the superstructure. The style of carving recalls the influence of dying delicate artistic traditions on soapstone of Karnataka. One of the inscriptions on a shrine records a donation by the Vijayanagara king Krishnadevaraya to the Tambiranar (the presiding deity) of Dindigul.