Champaner is located at a distance of 50 km from Baroda and at the foothill of the Pavagadh hill in Gujarat. The Pavagadh hill composed of reddish-yellow coloured stone formation is one of the oldest rock formations in India. The hill rises to a height of nearly 800 m from the mean sea level.

Pavagadh hill was a famous Hindu fortress under the Solanki kings of Gujarat followed by Khichi Chauhans. In 1484, Sultan Mahmud Begarah took possession of the fort and renamed it Muhammadabad. These monuments are located on the Mauliya plateau, which is situated on the hill. The earliest temple datable to 10th – 11th century is dedicated to Lakulisa of which only gudhamandapa and antarala is extant. Other temples belong to Hindu and Jaina sects and are datable to circa 13th – 15th centuries A.D. All the temples are of the Nagara style having garbhagriha, mandapa and an entrance porch.

The historical monuments at Champaner consist of a series of fortifications, some of which originate on the hill top and end on the plains. The fortification is consisted of massive sandstones with intermediate bastions with beautiful balconies. Out of the massive ruins, five mosques are still in good condition. The most important among them is the Jama Masjid which is located 50 east of the royal enclosure. The structures represent a perfect blend of Hindu-Moslem architecture, mainly in the Great Mosque (Jami Masjid), which was a model for later mosque architecture in India. This special style comes from the significant period of regional sultanates. 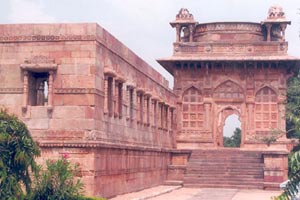 The Champaner-Pavagadh Archaeological Park with its ancient Hindu and Jaina architecture, temples and special water retaining installations together with its religious, military and agricultural structures, dating back to the regional Capital City built by Mehmud Begda in the 16th century, represents cultures which have disappeared.