The mandapa in the front has two lion- pillars and two pilasters, and beyond this in the centre, the cell is guarded by two dwarapalas. There are four panels on the walls of front mandapa representing Varaha raising goddess earth from the ocean. (Bhuvaraha panel). 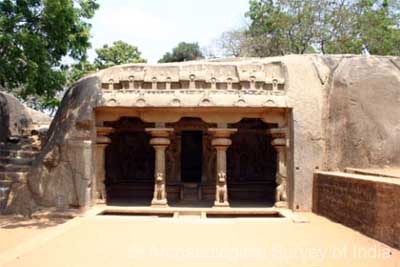 Gajalakshmi seated on lotus and bathed by elephants, Durga with four arms and Trivikrama overcoming the demon king Bali. The delineation and modelling of the figures are remarkable. 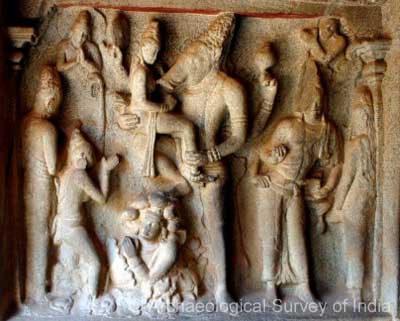 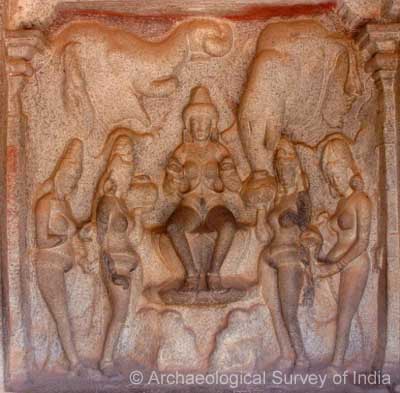 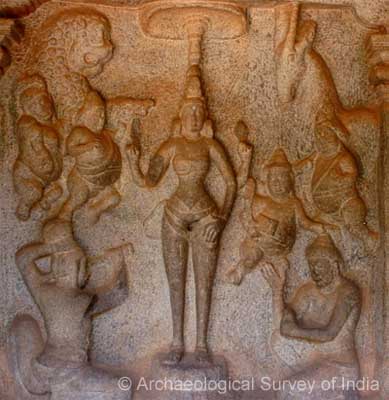 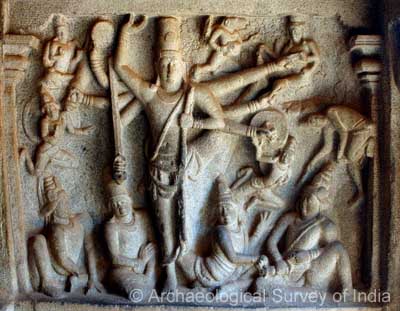 
Mahishamardini cave
The cave has a front mandapa with a triple cell with four pillars and two pilasters. On either side of this mandapa two large panels one representing Seshasayi Vishnu and other Mahishamardhini. The central cell is intended for a Siva Linga; on the wall behind is the representation of Somaskanda. 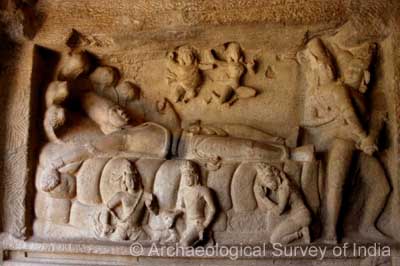 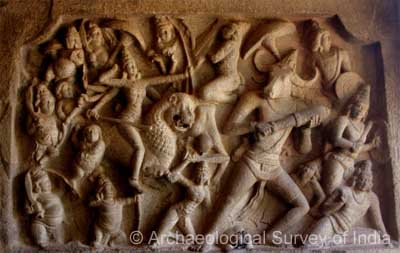 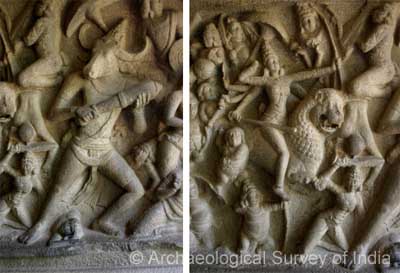 Close up details of Mahishamardini Panel

The triple celled cave temple with massive pillars belongs to Mahendravarman’s time. The cave temple contains inscription in Pallava grantha which gives the name of the temple as Atyantakama Pallavesvara -griham

A large cave temple of which only six lion pillars and similar pilasters at either end are finished. The brackets above the capitals of these pillars are decorated with lions and griffins with human riders. The pillars and Pilasters with vyala base mounted on square pitha

Kotikal Mandapa is a small primitive rock cut temple of Mahendra style devoted to Durga. The façade shows two massive pillars and pilasters at either side end. In the centre of the back wall a cell has been cut and is guarded by female door keepers on either side of the entrance. There is an inscription with 7th century letters-Sri Vamankusa.

An unfinished five celled rock cut temple with four pillars supported by couchant lions and flanked by pilasters and with a central cell.

A Triple celled temple with superstructure is believed to be dedicated to Brahma, Vishnu and Siva, the three gods of the Hindu pantheon. The entrance of each cell is flanked by dvarapalas in narrow panels.